In this exhibition Sean Dower presents new, recent and older work installed in response to the spaces of Laure Genillard’s Gallery. Dower’s exploratory practice is grounded in a sculptural investigation of our three dimensional experience of the world, where sound, light, film, performance, language and duration are as much a part of the vocabulary as objects or artefacts. The intangible or invisible also play a role and reminds us that the word ‘volume’ not only relates to mass and space but to sound and changes in air pressure. Dower’s work often draws attention to the interconnections between sound and sculpture. Traditional materials such as iron, quartz, copper and stone have electromagnetic properties and it is perhaps surprising to realise that these materials also mediate and mould the everyday sounds we hear.

In the upstairs gallery space minimalist looking sculptures complement each other with their unexpected use of sound. “Vibrating rod” suspended from the ceiling exists beyond audibility in the realm of the haptic and complements the mysterious sounds emanating from “Piezoelectric Panel”, a grid of 100 ultrasonic disks, set in a concrete panel. In piezoelectric cells a thin slice of quartz attached to a brass disk vibrates when electric current is applied and the brass disk flexes to produce sound. Likewise, a physical force applied to the quartz produces a corresponding electric current. High up on another wall, a laser pointer shines a thin beam of green light across the room, which becomes visible as it strikes a small mirror mounted on a speaker, which in turn redirects the beam around a corner. The varying sound pressure of the speaker causes the mirror to vibrate and project an oscillating pattern of light onto a monochrome photograph of a Neolithic standing stone. The stone is primarily made of quartz, a detail that could easily be overlooked.

In dialogue with these works, a six-panel text work "Noises" ("Bruits") presents a sequence of onomatopoeic French words that reference technology and suggest a violent but cartoon-style narrative. The ensemble suggests liminal modes of communication and the electromagnetic noises of military or other-worldly technology. In the downstairs space actual sound is conspicuously absent, however these works suggest the residual or projected traces of sound. The “Monumental Guns” series pairs photographs of publicly sited cannons and other artillery with their hypothetical targets. These juxtapositions are factual – and they seem to draw on the ‘what if’ musings that a passer-by might conjure whilst imagining the trajectory of a shell and the resulting damage. The work indicates a deadpan sense of humour combined with horror (and implicit history). The guns series revisits ideas Dower explored in earlier works. “Exploding Teacup Photogram” (1988) is a four panel photogram work where a standard cafeteria ceramic cup was placed directly onto photo paper and exposed to light on its three axes, before being blown up with an explosive charge in the fourth image, illuminating and burning the paper. “Between Terror and Relief” (1988-89) consists of a painted text work made in relief on paper and an accompanying photo of two adjacent billboards spotted after the painting was made. This work explores the nuance of emotional expression in language and touches on the extraordinary nature of coincidence.

A characteristic playfulness of Dower’s approach is the way he pays direct and indirect homage to other artists’ work and he treats the exchange as one might when holding a conversation, with its potential for interpretation, transformation and misunderstanding. 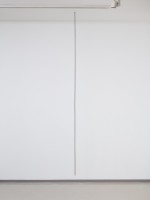 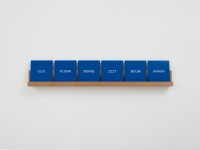 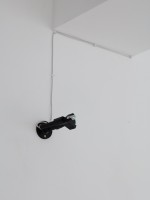 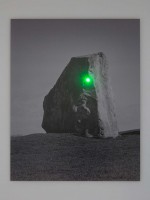 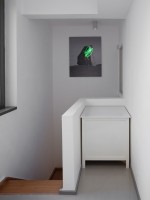 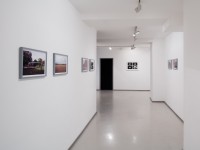 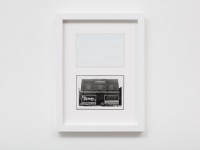 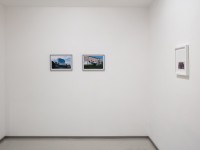 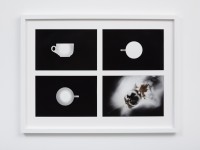 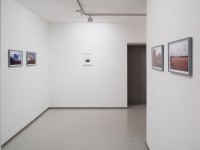