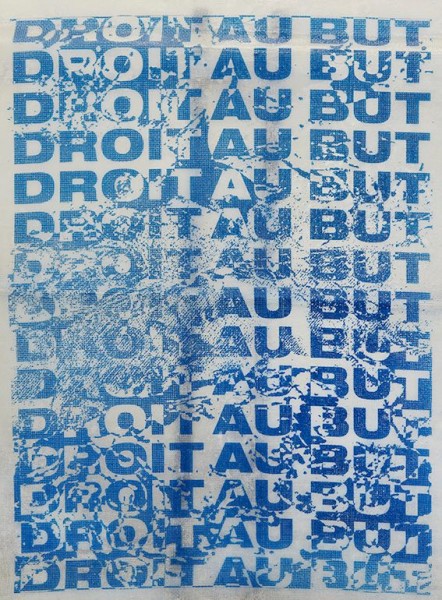 Laure Genillard presents Object 77b. Exhibiting together for the first time, artists Ludvig Gustafsson, Felicity Hammond and Anna Reading will present a series of new and recent sculptures, video animations and photographic material that in collusion loosely follow the tropes found in the 1971 Russian novel Roadside Picnic by Arkady and Boris Strugatsky.

The science fiction novel – from which the exhibition borrows its title – is a prescient inquiry into the consequences for mankind of prolonged proximity to the Unknown, with its wonders, dangers, ineffability and anxieties. In the book, aliens have come and gone without any humans knowing. Only afterwards do they discover the debris left behind: inscrutable, invaluable, or highly dangerous. In the process of scrambling together to make sense of these new objects, social life becomes coarser and apprehensive as black markets in alien products begin to thrive and the prevailing authorities construct new buildings and institutions to secrete their intentions.

Parallel to the exhibition's title, the works present allude to states of abeyance: items that have been found but not yet fully identified or finally determined. Ludvig Gustafsson’s visually aggressive sculptures are meticulous reconstructions and exploitations of items that were once lost in limbo. Each work reveals a series of tactical enhancements to its properties and former identities through the layering of material such as dental wax, bronze, fiberglass, resin or car roof racks, forging new energies through its indeterminacy. Moulded within the plastic sheeting that often conceals them, Felicity Hammond’s ballast is poached from the foundations of soon-to-be luxury development sites in London, and reference the site’s preceding and succeeding states of demolition and resurrection. The sculptural photo elements lodged within and around their cores are digitally recreated visions of forgotten industrial landscapes that record the ongoing recalibration of a dismembered environment. Anna Reading’s acutely organic handmade forms, exploring the body in relation to commodity products invite closer engagements. Yet her devices of repetition and blurring of boundaries give rise to an unsettled feeling that prevents any subsequent arrival — temporariness prevails in a perpetual feedback loop.

Felicity Hammond received a Masters degree from the Royal College of Art in 2014, and is currently undertaking a TECHNE funded PhD at Kingston University. She has been a finalist and nominee for numerous awards including: Foam Talent, 2016; British Journal of Photography’s International Photography Award, 2016 winner; and Saatchi New Sensations, 2014. Her work has been exhibited widely and most recently at Beaconsfield Gallery London and Redhooks New York for Foam Museum’s touring show; Space in Between, solo show, London 2016; Tate Modern in collaboration with Self Publish Be Happy, London 2016; Somerset House for Photo London with The Photographer’s Gallery, London 2016 and 2017; and Saatchi Gallery, London 2015. Her recent commission, In Defence Of Industry was commissioned by Signal Media and supported by Arts Council England, and was exhibited in Barrow-In-Furness, UK, 2017.

Anna Reading lives and works in London. She graduated from her MFA at the Slade, UCL in 2017 and has been awarded the HKBU Artist Residency in Hong Kong, Summer 2017. Recent exhibitions include; Memememe, Crypt Gallery, London, 2017; Holding The Vessel, The Chopping Block, London, 2016; Forwards: Backwards, Dona Laura’s, Lisbon, 2016; Five Minutes, The Koppel Project, London, 2016; XXL, Hotel Elephant, London, 2016. In 2015 Reading was awarded Siva-Finestone Scholorship at the Slade and was the winner of Creekside Open 2015.