Laure Genillard is pleased to present Various Paintings on Various Colours, an exhibition of constructed paintings by Australian artist John Nixon, marking the artist’s third exhibition at the gallery. Nixon has been exhibiting his version of non-objective art in Australia and internationally since the early 1970s, exploring and expanding the principals of minimal and geometric abstraction in an attempt to convey their potentialities. His motivations were originally informed by late 1960s minimal art, conceptual art and Arte Povera, then channelled through the early movements of Russian Constructivism, Futurism and Fauvism – movements which have sought to challenge and re-define the function and purpose of art and that still inform his practice today.


The exhibition is organised around a group of twelve recent works. Together, they survey the artist’s use of primary and secondary colours, art and non-art materials, and his relationship with the surrounding architecture. The simple shapes, tools and wasted off-cuts seen in the works are found and employed serendipitously by the artist; pieces of chipboard, a set-square, part of a chair leg, cardboard cones or other items he happens to find, are set aside and await the moment when their shape, colour, texture or size become essential components to be repurposed into a new piece. Yet these day-to-day coincidences are nested in his own self-devised rules and rationalising. For instance, three groupings appear in various systematic formations, such as the three canvas works with cross colour formations, the three chipboard works with diagonal formations or the three plywood works with circle formations. Another seriality links the six coloured walls with the same six colours across various works. 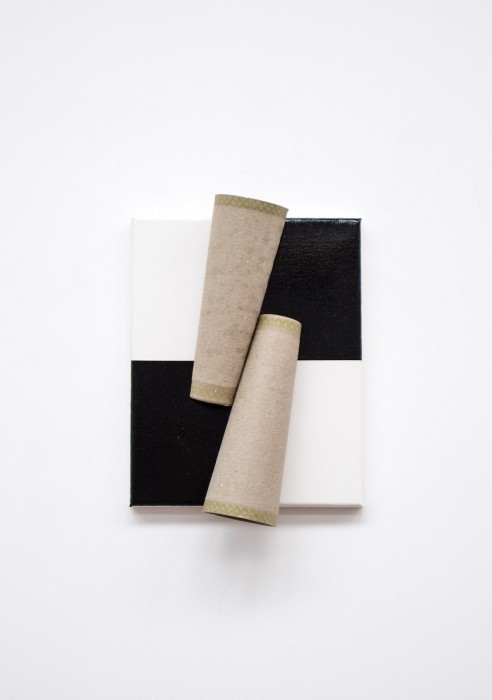