Performance by Yukio Fujimoto at 1 PM on Saturday 21st February

This is an exhibition focused on the nature of human perception. The circumscription of our aural and visual experience – simply, through the way our bodies work – is played on by David Cunningham (b. Ireland, 1954) and Yukio Fujimoto (b. Japan 1950) in order to achieve compelling artistic outcomes. They make the most of the truism that we only hear what we can hear, and see what we can see.

This is the first time Cunningham and Fujimoto, both equally acclaimed and influential internationally, have exhibited together. Each has been very aware (and admiring) of the other’s work, having arrived at similar aesthetic propositions, eschewing illusionistic gestures – “no metaphor “ - placing emphasis on what happens in real time whilst acknowledging that all our experience, artistic and otherwise, is determined essentially by the nature of our sensory organs and nervous systems.

For this exhibition, Cunningham has made a new work based on his concept of “The Listening Room”. A manifestation of his continued enquiry into the relationship between sound, audience and environment, it involves a sound system that allows the resonant frequencies and imperceptible sounds of the gallery space to become audible, a process modulated by very slight acoustic changes as people move around the room, from ambient sound, from humidity, from anything that causes air to move. Thus the presence of the spectator integrates the object of the work with its subject.

Cunningham explains that his work “could be considered to be a sculpture in the sense that there is a consistent structure which is moderated by conditions of the space, just like a sculpture catching different patterns of light at different times of day or in differing locations.” Likewise, Fujimoto makes an analogy with the visual arts: “I always approach my work as though it were a painting”. Taking the entire gallery space as a support medium, he presents instances of sound and matter – each complete within itself and also as a group – in order to experiment with the way they impinge on our senses.
Fujimoto is concerned especially with “point of view”, as it applies equally to our experience of sound and visual phenomena. The location and movement of the viewer (or listener) with respect to the work he presents is key to both the experience and understanding of it. Through assorted found objects (e.g. clock mechanisms, lenses, keyboards and stereoscopes) and kinetic assemblages, for his “Philosophical Toys”, amongst other things, Fujimoto takes us on a voyage of discovery into what we usually take for granted - namely our ways of being in the world. While reflecting on the principles that inform his work, Cunningham puts forward the idea that “doors should always be open, or opened for you”. He could be speaking for both artists in this exhibition.

David Cunningham (b.1954 Ireland) lives and works in London. Studied at Maidstone College of Art on David Hall's pioneering Time-Based course (1977). Cunningham's work has ranged from pop music to gallery installations, including music for television, film, contemporary dance, and many collaborations with visual artists. His installation works explore the real time experience of the acoustic qualities of a space. Locations have included Chisenhale Gallery London 1994, Biennale of Sydney 1998, the Tate Triennial of Contemporary British Art 2003, ICC Tokyo 2003, Ikon Gallery Birmingham 2003, Camden Arts Centre London 2005 and 1m³ Lausanne 2008. He has taught in many Fine Art departments and held the positions of Research Fellow at both University of Newcastle upon Tyne (2002- 2005) and London College of Communication (2006-2008) most recently Visiting Professor at the Royal College of Art (2011-2012).

Yukio Fujimoto (b. 1950 Japan) represented Japan at the Venice Biennale in 2001 and was selected in the international exhibition of the same event in 2007. In Japan he attracted much attention for his "Audio Picnic at the Museum" exhibition, which he planned and organized himself for one day each year for ten years from 1997 till 2006. Through it he proposed to both viewers and museum curators a new form of artistic expression. In 2007 he held a solo exhibition at the Hiroshima City Museum of Contemporary Art and then held three simultaneous solo exhibitions at the Otani Memorial Art Museum, Nishinomiya, The National Museum of Art, Osaka, and The Museum of Modern Art, Wakayama. In 2008 he has participated in exhibitions "20th Anniversary Exhibition Collection + (Plus) Reverberating Sound-Colour-Form (Takamatsu City Museum of Art, Takamatsu), “Takehisa Kosugi + Yukio Fujimoto ‘Music” (Aomori Contemporary Art Centre, Aomori). In 2009 he had a solo show of “The Tower of Time” Ikon Gallery, Birmingham, in 2011 "n/t - phonography / photography-” ShugoArts, and participated the “phono/graph sound, letters, graphics” Ginza Graphic Gallery, Tokyo in 2014. 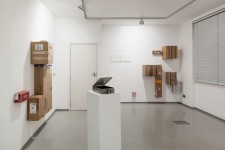 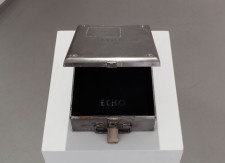 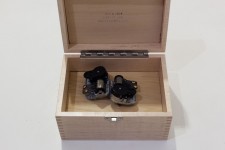 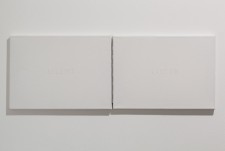 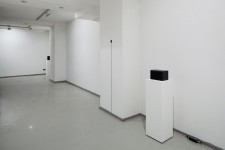 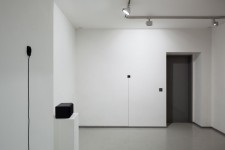